← The Kiss of Death
SAT’s: JUST ANOTHER ROUND OF LETTING GO →

Are You a High-Functioning Alcoholic?

Twenty-five years ago today, I had my last drink.

And now I’m working on a book proposal for a memoir about my drinking years and recovery, researching articles and sites that support my project. When I found this piece on high-functioning alcoholics, I found myself. At least, who I was.

A bona-fide HFA. Could you be one too?

How to Recognize a High-Functioning Alcoholic | Intervention.

Warning Signs and Symptoms of HFAs

Although some of the warning signs and symptoms of HFAs are similar to those of other alcoholics, they often appear at different stages of the progression of alcoholism. Some signs may not be present in all HFAs, or may occur in clusters. One thing is certain: the longer the HFA goes without treatment, the more likely he or she will display some of these warning signs and symptoms.

• In the company of others who drink – The HFA surrounds himself with others who like to drink. This assimilation makes it difficult to pick out the HFA as being different from the rest. Besides, the HFA truly enjoys drinking and being around others with similar likes.

• Obsessing over alcohol – The thought of alcohol is never far from the mind of the HFA. Counting hours until the next drink, mentally savoring the mellowness and pleasure of the impending drink, calculating how much alcohol can be consumed without any outward signs of drunkenness – the HFA obsesses over alcohol.

• Consuming craving – One drink is never enough for the HFA. The lure is too strong, and the craving consumes the HFA until he or she can have the next drink – and the next, and the next. Before long, the HFA has lost control over total alcohol intake – even though he or she still may appear outwardly normal and in control. After all, they are masters of discipline and concealment. 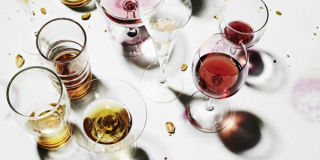 • Finishing drinks of others – If someone the HFA is with leaves a drink on the bar or the table, the HFA may pick it up and finish it. “Don’t want to let this go to waste,” he may say in a joking manner. Related to this is the example of the HFA downing his own drink when it’s time to leave – to go to the table at the restaurant after waiting at the bar, for example – and then quickly ordering another. If a family member or friend doesn’t touch his or her drink, the HFA often drinks it along with his own.

• Experiencing shame over drunken behavior – Being such masters of concealment, the HFA does often experience remorse and/or shame over instances where their behavior has become sloppy after drinking. Such behavior isn’t part of their carefully crafted images and they consequently work even harder to avoid such mistakes in the future. But they won’t quit drinking.
They’ll just watch their behavior more.

• Self-deluding – Some HFAs drink only expensive wine or liquor in the mistaken belief that this means they’re not an alcoholic. It’s a self-delusion that allows them to continue to drink with impunity.

• Fit life into compartments – Another familiar sign of HFAs is that they are able to conveniently separate their drinking lives from the rest of their existence. Who they are at home, on the job, or to casual acquaintances is totally different from their drinking routine and environment.

• Tried to quit but failed – At some point the HFA may have tried to quit drinking but failed in the attempt. This pattern may often be repeated, but still the HFA refuses to seek treatment. It is part of their personality makeup, their self-constructed identity that they feel they can handle their drinking on their own. Such refusal to get help is difficult to overcome.

• Excuses and rewards – HFAs feel they work hard and deserve a drink as a reward. Drinking, to the HFA, is both an excuse and a reward. The HFA may even use those words in defense of his actions – to himself and to others.

• Hiding and sneaking – When others are going to be around – and watching – the HFA may sneak a drink early, drink before going out, or drink alone. Such secrecy is part of the concealment of the HFA’s true problem. He or she has to get in the drinking, but can’t take the risk of others finding out or suspecting the real problem.

← The Kiss of Death
SAT’s: JUST ANOTHER ROUND OF LETTING GO →