SAT’s: JUST ANOTHER ROUND OF LETTING GO

This piece is from a mother/daughter memoir we’ve  been working on for a number of years.

My daughter took her first round of SAT’s. Before delivering her to the site where hordes of anxious adolescents stood by padlocked doors waiting access to this barbaric rite of passage, we argued about food. She didn’t want to eat. I told her she needed fuel for her brain.

Of course she won.

As she stepped from the car she whisked off her jacket, exposing a pink tank top filled with her young ripening body, then flung the garment into the back seat. My heart stopped. First no breakfast, now no jacket. How will I ever get through this? I cried the whole way home. A sophomore in high school, she’s far too young for the rigors of this pre-college inquisition. I’m almost certain I weaned her from my left breast the other day.

This only child of mine has always been a good student, using grades to fill the gap our broken home left in her psyche. Testing has never been a problem for her. I don’t believe she even grasps the phrase test anxiety. This was not the case for me. An affliction I’ve been intimate with for many years. Far more intimate than I’d like to admit.

A second child, I’m one of the middles of four siblings. My sister, the academic headliner of the family, was a master performer on the scholastic stage. Waltzing her way through high school with top honors, I had the inconvenience of trailing behind her—three years her junior—not enough time for teachers to annihilate her brilliance from their memory banks. Ah, Sue Weis’ sister, they proclaimed upon eyeballing me my first day of freshman year. We’re SO glad to have another Weis at our school. Despite emerging from the same womb, my sister and I had little in common, a romance with testing was not one of our shared attributes. Witnessing the nonchalance my daughter brought to the task, sauntering from the car as if meeting a small gathering of friends, I considered her the same alien pedigree as my sister.

I vaguely recall the day I took the SAT, certainly not in my sophomore year, as I slogged my way through the mire of high school that year. With desks crammed together in a stuffy classroom, I imagine sweat pouring from pits and gushing from palms, prohibiting me from holding my pencil in place, that cursed #2 point slipping from the page, marking the wrong minuscule circles on the answer sheet that seemed an irritating blur before me. Or being so nervous my blood sugar plunged off the hypoglycemic charts, which meant not one clear thought surfaced during the test session, let alone a correct answer. 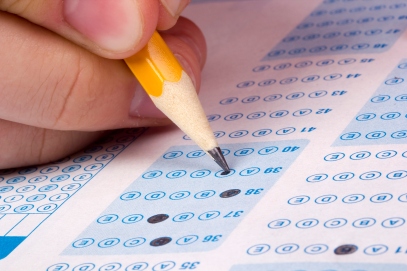 Naturally my scores reflected my battered composure. My math score slid into second at 485 and my verbal struck out swinging somewhere around 423. I believe they gave us two hundred points just for showing up and scribbling our names—a bribe of sorts—the only surefire way they could guarantee my attendance. As my mother used to say, in a tone far too syrupy for the message she aimed to provide, My darling daughter, you are your own worst enemy.

Those words chimed in my ears as I fetched my daughter after completing her exam. She smiled brightly as she slid into the car next to me. Though I’ve suggested that testing is not an issue for her, I detected a different demeanor, a bit more relaxed. I asked how it went. She shrugged her shoulders as she always does, not exactly sure how to decipher her own performance. I only left five blanks, she said proudly. All the others I knew.

She was hungry and craved a high caloric breakfast from McDonald’s, a sausage biscuit to be exact. That sounded good to me. Comfort food was what I needed. Because I am still my own worst enemy. I’m the one who worried for days about my daughter’s SAT, worried about her getting enough rest the week before, about her skipping breakfast the morning of and relinquishing warmth for fashion before entering the test site. And as I watched her chomp down on her sausage biscuit, I sighed, knowing I’d just gone through another round of letting go.

Posted in memoir, Mothers and Daughters

An excerpt from our yet to be published mother/daughter memoir, WAKE UP MAGGIE! GO AWAY MOM! The Dueling Diaries of a Teenager and Her Mom.

I send Mag off to school and go back to bed. Still tired from a fitful night’s sleep. I drift into a zone-like state at 8:40 or so. Having a sense something’s terribly wrong. I wake at ten. Switch on my laptop, connect to the web. See the image of Twin Towers enveloped in flames. I think it’s a joke. Similar to “War of the Worlds.”

Dazed, I stumble downstairs and turn on the TV. Peter Jennings, whose voice is always a smooth stone, sounds scared. “Oh God,” I say out loud, “this is no joke.” I pick up the phone, call Laurie, as the second Tower tumbles to the ground. The acid in my stomach rises like the cloud of debris I see on TV.

We babble a few minutes. Find solace in the rambling. As I hang up the phone, I quickly dial Maggie’s school, need to know she’s okay. A knee jerk response to a crisis like this. Annoyance pervades the secretary’s voice. She obviously doesn’t feel the same. How many calls has she gotten like mine? They’re watching it on TV, she says. They won’t be let out early, she says. Don’t know if they’ll have drama practice, she says. My stomach lurches, along with the acids. What will I do until she gets home?

Laundry? I think not.

I glue myself to the TV. Then bolt to the kitchen to escape. I try some melon. Hoping my favorite fruit will calm me down. With planes exploding, and people jumping, blazing across the screen, I can’t taste a thing. Never occurs to me to turn it off.

Those damn images imprinted on my brain.

Getting through this without drinking, a major miracle.

I call Laurie again. She invites me over. I shake my head no. It’s hard to be alone. But can’t leave the house. Have to be here for Maggie.

Phil calls. From Montana. He planned to come home tomorrow, but planes are grounded. He tried reaching Ma in NJ. But phone lines to the New York area are tied in knots. We don’t talk much, this brother and I. He feels like a lifeline. So, when you comin’ home? I say. No idea.

By the time I speak with Jim, the day is sinking in. The sound of his voice softens my heart. For the first time, I surrender to tears.

When Maggie gets home, we hug fiercely. I study her face. This event will change her forever. Rob her of her innocence, more than any man ever can. I want to see if that’s happened. She only needs to say a few words and I know it has. She seems wired, but held together, as she is most of the time.

We watch the news far too long. Order out for pizza like a video’s being viewed. At times during the day, I’m certain that’s what I’m watching. One of those movies, I never go to see. By now, it has sunken in. Tears spill from my eyes. The dissolving buildings bring back the dissolved marriage. How I long for Jim’s arms to ease this horrific pain.

Instead, I go for the pizza. Drive through town to Paisano’s. I examine the faces of people there. Everyone looks so different.

Have they really changed or is it me?

Riding back home, I notice the flags. They hang from telephone poles along the way. Put up for Old Home’s Day,[an annual August event celebrated in our town]. Just a week ago, I felt irked by their continued presence. Tonight, I see them in a new way. A source of comfort on the lonely ride home.

I wake in the middle of the night, feeling that old terror I felt as a child, when A-bombs were being tested in Utah. Visions of air-raid drills, of us kids at St. Joseph’s grade school crouched under desks or ducking in halls, goose step in my head.

My heart’s cracked wide by this event.

When will it end?

Fourth period was just starting, when my principal, Mr. O, came on the loud-speaker and announced that terrorists had just flown two planes into the World Trade Center. Everyone was crowded around the speaker, silent and shaking. Miss Filler turned on the TV in time for us to see the towers collapse. I went numb. Then I felt sick. I was torn between crying and throwing up. Instead, I just sat and watched the planes crash into balls of fire, over and over again. We actually tried to make a couple of jokes – what about, I can’t remember now.

For the rest of the day, the TVs were on constantly, even during lunch. By the time sixth period rolled around, we were discussing the politics of it all. The whole situation felt so out-of-place, but it distracted me from the TV for a while. And that image. Those two beautiful buildings, collapsing in on themselves.

Mom cried a lot. I couldn’t at first. But it hurt to breathe. I felt sick as I climbed in bed. Mom gave me a back rub. That’s when it started. First a few tears, then some more, then some more. I screamed and sobbed. I couldn’t stop. So many thoughts came out of my mouth. Was I going to die? Were any people still alive in the wreckage? How could people hate us so much? Why do I deserve to live?

Spent the night in Mom’s room. On a mattress on the floor. Surrounded by stuffed animals I hadn’t touched in years.

I didn’t go to school today. Instead, stayed home and watched the news.

The world will never be the same. The US has been attacked and we are no longer safe. I have had one of those times when the ‘immortal moment’ has happened. Like “where were you when Kennedy was shot?” or when Princess Diana died? I will always remember I was in calculus class when the Twin Towers fell in on themselves, and thousands of people died.

Posted in Mothers and Daughters